Rolf Brunner has been called a pioneer in laser cutting and laser engraving. He grew up in Zurich Switzerland. Rolf always had an interest in art and making intricate and pretty things.

While teaching shop at an elementary school, Rolf found a book with some fretwork. Brunner sent over 75 letters to England to learn about this almost forgotten art. He visited the Strong museum in Rochester New York and contacted a clock maker in Pharr, Texas who started fretwork by using a Ford model T engine to cut his artwork.
Rolf started to design his own designs and was published by the world famous author Patrick Spielman who has written many books on scroll saw work and fretwork. He was also published in the Wood magazine by Better Homes and Gardens with some of his designs.

In early 1990 Rolf heard about a new way of cutting wood. It was a laser engraving machine. He started to explore the idea of using one of these new machines, and in 1995 he purchased his first one. Since this was such a new concept, it was difficult to get a bank loan for such an expensive new type of machine. Rolf contacted the SBA and was able to purchase the newest machine on the market.

Many items available for sale have been designed by Rolf and other artists from around the world. Working collaboratively to create these intricate designs allows them to offer some of the more elaborate gifts.

Rolf’s work can be found in many gifts shops as well on his website.

Stan Cook was born in Point Pleasant, West Virginia and grew up in Mason, West Virginia. Stan received a bachelor's degree in education from Marshall University. Stan spent ten years in public education as a high school math teacher as well as teaching college chemistry at Marshall's MOVC campus. He left education in 2008 to devote himself to woodturning full-time and now resides with his wife, Vicki, and English Springer, Riley, in both Mason and Marlinton, West Virginia. Stan also enjoys fishing for trout and catfish.

Stan began woodworking as a hobby and is primarily self taught. After attending a woodturning symposium in Lexington, Kentucky, his interest in turning grew dramatically. While he began his craft turning mostly pens, he has evolved into making intricate wood bowls and boxes, most recently applying vibrant color combinations, pyrography, and carving to further enhance his work.

Stan mainly uses wood that comes from fallen found wood. Primarily maple, walnut, oak, cherry, box elder, and ash are used for his one-of-a-kind pieces. He also enjoys working with exotic woods like brown and red mallee burl from Australia and reclaimed woods like 50,000-year-old kauri, 5,000-year-old Irish bog oak, and silver birch from the bottom of Lake Huron. He is also always on the lookout for unusual woods to use like the oak from authentic Jack Daniels barrels and wood from a torn-down gym to create mementos for the alumni.

In addition to belonging to the Mountaineer Wood Turners, a chapter of AAW, Stan is also a member of the Pocahontas County Artisans Co-Op, has been juried member of Tamarack since 2005, and participates in a variety of art shows and festivals around the eastern USA throughout the year.

More of Stan's creations can be seen at his Facebook page 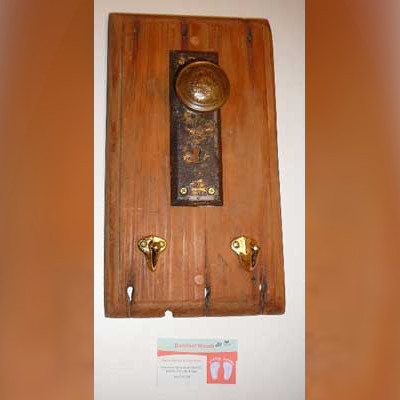 Dianne and Sarah call their business Barefoot Woods. They specialize in rustic crafts and in repurposing found items into useful new ones. 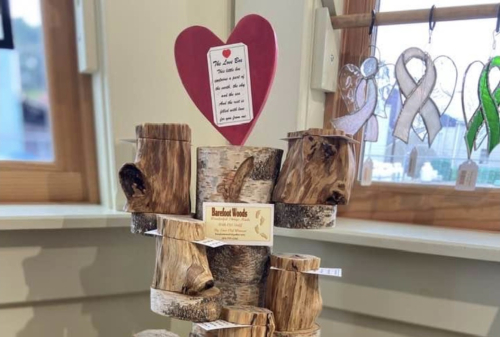 Barefoot Woods are now featuring Love Boxes, made out of rhododendron that had fallen in the woods.

"This little box contains a part of the earth, the sky and the sea and the rest is filled with love for you from me”. Each box has a rock, a feather and a seashell. They have been used to carry wedding rings and to hold an engagement ring. A grandmother has given one to every grand child and a 15 year old boy got one for his “first love”. We love people letting us know how they have used them. They are truly LOVE BOXES.❤️

Born, Feb 12, 1955, in Missouri, I grew up in the Chicago area. At age 23 I moved to Colorado where I lived for ten years. I've also lived in New England, Florida, and now West Virginia.
Since childhood I've been a writer, including writing technical publications for the software industry, as well as short stories, essays, poetry, and science papers. In the early 2000s I had a flirtation with brush and canvas painting for a while, but work and other obligations eventually got in the way of that pursuit, though I've continued doing abstract digital art since that time.
I'm an explorer and collector by nature, and enjoy few things more than a walk in the woods, so perhaps it was inevitable that something instinctive kicked in when I began carving bowls and sculptural wood pieces a few years ago. I also have an interest in geology. I had a rock collection as a kid and I've incorporated this interest in the form of stone inlays in many of my wood pieces. 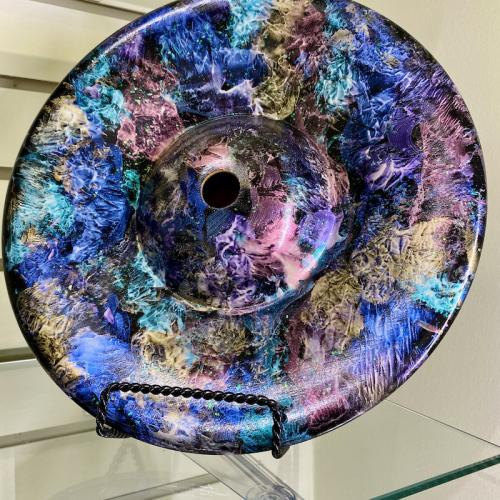 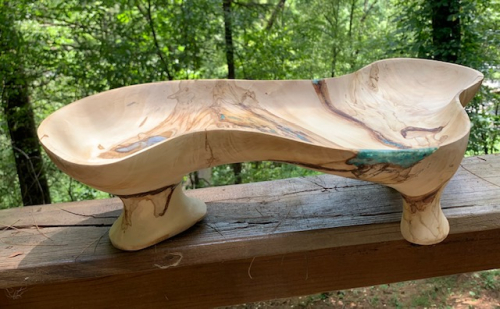 While I enjoy doing smaller, simpler, or more conventional pieces that bring out the uniqueness and beauty of a species or individual piece of wood, I'm also constantly imagining new themes, concepts, or individual pieces, At any one time I typically have one or more complex or sculpted pieces underway. In addition is the queue of pieces still in my head as I explore what might be thought of as sketches on a theme as well as new forms.
Artistic influences...
I've lived, traveled, hiked, backpacked, and camped in diverse areas, including California, the Olympic Peninsula in

Washington State, Wyoming, Colorado, Utah, Arizona, the shores of Lake Superior, up and down the coast of Maine, and Pocahontas County, West Virginia, where I now live. Besides an interest and affinity for a range of art and design, including 20th century art deco furnishings, 1930s automobiles, sleek boats, and modern sculpture, the landscapes of wild places have been an influence in my aesthetic, particularly rugged shorelines and seacoasts and the canyons and fantastic rock formations of the western states. In such places nature holds a cache of diverse and exquisite sculpture, ages in the making.
David W. Skellion

Scrolling through retirement. After thirty years working in all kinds of weather as a power company lineman, Kenneth Slagle now relaxes, out of the weather, with a cat or two by his side, as he scrolls out ornaments, hand saws a scene, trivets, clocks, and other designs. As a former marine He believes any active military personnel and veteran deserve a blessing. Some of his favorite pieces are boxes for all branches of the military in which his wife, Charlotte, writes a blessing in the bottom then lines it with colorful cloth--forming a "Blessing Box". Each piece of art is done individually, and no two are ever alike. Bring a blessing into your home with Kenny's Kreations,